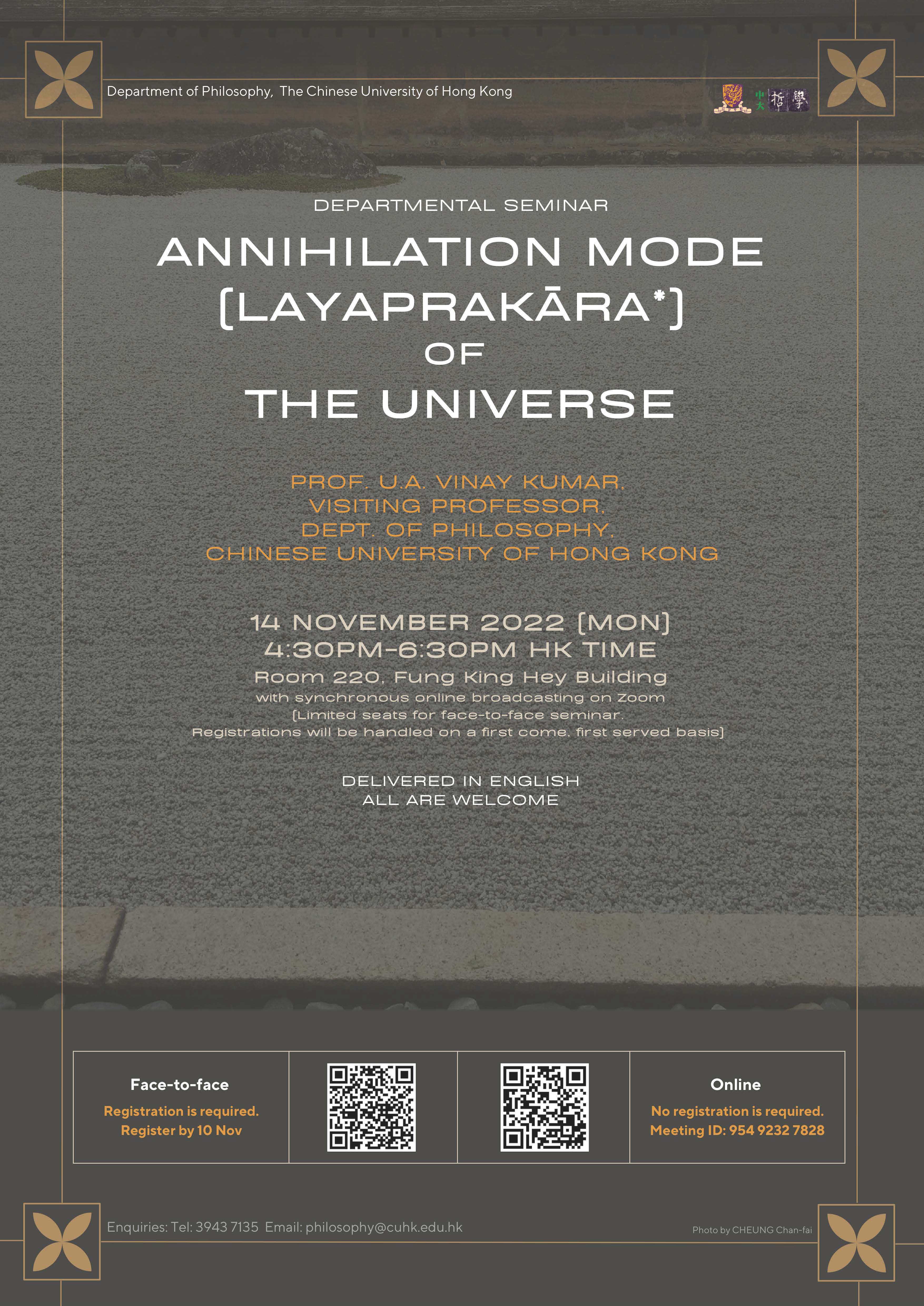 Limited seats for face-to-face seminar. Registrations will be handled on a first come, first served basis

“There is no picture- or theory-independent concept of reality.” — Stephen Hawking (2010) p. 42
“2.12 A picture is a model of reality…….3.01 The totality of true thoughts is a picture of the world.” -TLP
– L. Wittgenstein
“The religion of the future should transcend a personal God and avoid dogma and theology. Covering both natural and spiritual, it should be based on a religious sense arising from the experience of all things natural and spiritual as a meaningful unity. Buddhism answers this description………. If ever there is any religion that would cope with modern scientific needs it would be Buddhism.” — Albert Einstein (from writings as quoted in the Zen Mountain Monastery Newsletter 1989.)
* Asti (sthiti –is, sustain), jāyate (janma- take birth, create), vardhate (grow), vipariṇāmate (change), apakṣīyate (wane), vinaśyate (laya) are the ṣaḍbhāvavikāras of the Universe. The first two and the last one together constitutes the three major prakāras (modes) of the Universe. [Sharma (1962) p. 155]

(i) Utility of this study: (a) as an endeavour to move the research in this important philosophical field forward from its apparently stagnated state; (b) lending clarity of expression and thought is to the hitherto hazy ‘pictures’ without explanation of the hidden primitive terms within larger concepts such as for example: “Tathāgata”, “Tathāgatagarbha”, ‘Vijñaptimātratā”, and so on and so forth; (c) lending impetus to scientific approach in this direction; (d) (due to the necessary sequential reasoning involved, predictability about next logical steps ensues, hence) throwing light on the possibility of texts/concepts that are extinct, thus leading to attempts to retrieve the same. Note: This study does not claim to be exhaustive, but only indicative.

(ii) Buddhism is the most fundamental ontological thesis of all times for all major world religions. Proof of this lies in the ‘continuation’ caused by way of ‘slight modifications’ in the succeeding thought processes in a sequence, both in Indian thought and in Semitic tradition. (Chronological sequence is yet to be traced, especially with respect to Semitic tradition vis-à-vis Buddhism.)

(iii) Is Buddhist Ultimate a positive entity or is it a pure nihilism? It is not a nihilism.

(iv) Giuseppe Tucci rightly remarked that “they (yantras, manḍalas, etc.) are symbols which are well designed but also difficult to understand. Indeed, their original signification may today be unknown to the adepts themselves.”

(v) T.R.V. Murti points out that: “For a critical student of Indian Philosophy the different Absolutisms present one of the crucial but unsolved problems. We are confronted with the Śūnya of the Madhyamaka, the Vijñaptimātratā of the Vijñānavādin, the Brahman of the ((Advaita)) Vedānta, Īśvarādvaita of the Pratyabhijñā system, Śabda Brahman of the Vaiyākaraṇas…….” Murti rightly calls this problem of distinguishing as an ‘unsolved problem’.

(vi) In fact, the problem of differentiation is not restricted to Absolutist philosophies alone. The problem occurs even with theistic Absolutes.

(vii) Original signification implied of Tucci when understood, will answer the problem posed by Murti.

(viii) Is Buddhist Ultimate (in all its shades) different from Advaitic Brahman or not? If yes, then is there an effective way to so understand other than mere verbal description?

(ix) Different shades of Buddhism possess different names for their Ultimate. These names are, mostly, the names derived from or given to them by the ‘process’ the particular shades adopted to reach the Ultimate.

(x) The ‘process’ itself was conceived to answer a larger issue of ‘epistemological problem’ arising out of the perceived necessity for an authentic claim for the ‘Nothingness’ they had conceived in consonance with the original Buddhist thesis.

(xi) We are confronted with not only Murti’s point of distinguishing Buddhist Ultimate from other Ultimates, but also between the Ultimates of different shades of Buddhism itself.

(xii) Answer given here for the problem of distinguishing is “Individuating Factors” or simply I-Factors.

(xiii) These I-Factors clearly demarcate between different shades and also main systems. Modern conceptions have been used here to draw these I-Factor diagrams.

Delivered in English.
All are welcome.