Making Sense of “Pure Ego”: Husserlian, Hegelian and Some “Really Materialistic” Meditations on a Peculiar Experience of the Self 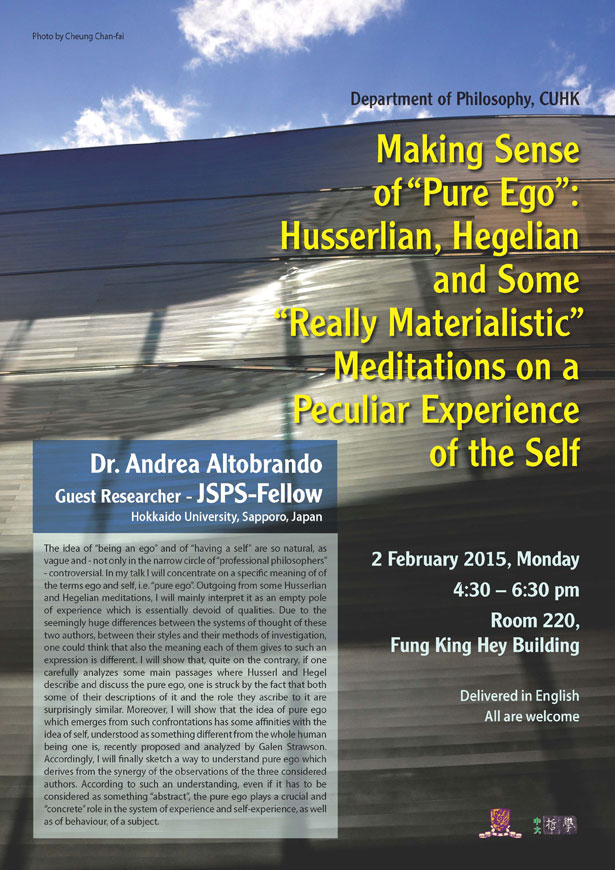 提要：
The idea of “being an ego” and of “having a self” are so natural, as vague and – not only in the narrow circle of “professional philosophers” – controversial. In my talk I will concentrate on a specific meaning of of the terms ego and self, i.e. “pure ego”. Outgoing from some Husserlian and Hegelian meditations, I will mainly interpret it as an empty pole of experience which is essentially devoid of qualities. Due to the seemingly huge differences between the systems of thought of these two authors, between their styles and their methods of investigation, one could think that also the meaning each of them gives to such an expression is different. I will show that, quite on the contrary, if one carefully analyzes some main passages where Husserl and Hegel describe and discuss the pure ego, one is struck by the fact that both some of their descriptions of it and the role they ascribe to it are surprisingly similar. Moreover, I will show that the idea of pure ego which emerges from such confrontations has some affinities with the idea of self, understood as something different from the whole human being one is, recently proposed and analyzed by Galen Strawson. Accordingly, I will finally sketch a way to understand pure ego which derives from the synergy of the observations of the three considered authors. According to such an understanding, even if it has to be considered as something “abstract”, the pure ego plays a crucial and “concrete” role in the system of experience and self-experience, as well as of behaviour, of a subject.