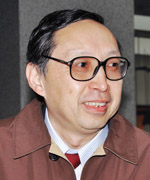 Professor Chen is a prolific writer with over twelve academic monographs published, including (all in Chinese) A Study of Zhuxi’s Philosophy (1987 & 2000), Dating of Zhuzi’s Letters (1989), You Wu Zhi Jing : The Spirit of Wang Yangming’s Philosophy (1991), Ancient Religion and Ethics: The Roots of Confucianism (1996), The World of Ancient Thoughts and Culture (2002), Interpretation and Reconstruction: The Spirit of Wang Chuanshan’s Philosophy (2004) and Studies on Bamboo and Silk Versions of Wuxing and Other Newly Unearthed Confucian Texts (2009). In 2009, the Joint Publishing Beijing compiled the “Academic Monographs of Chen Lai” series, collecting twelve representative works of Professor Chen.

As the fifteenth incumbent of the Tang Chun-I Visiting Professorship, Professor Chen will offer a public lecture on “The Genesis and Transformation of the Concept of Guoxue in the Past Century,” a four-week graduate seminar on “The Features of Zhuzi’s Commentary on the Four Books,” and a departmental seminar on “Zhuzi on the Four Virtues and Its Significance.” 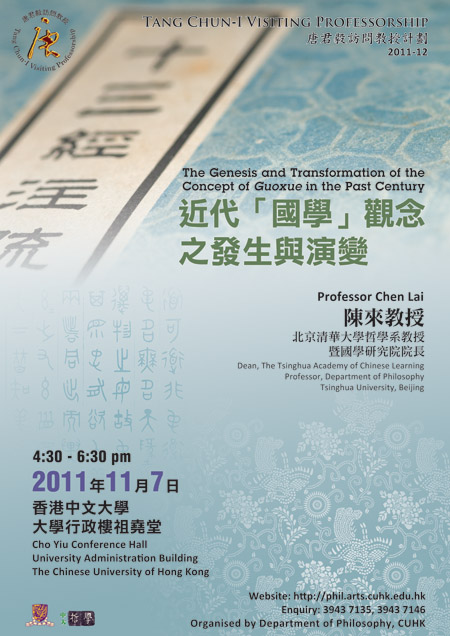 The Features of Zhuzi's Commentary on the Four Books

Zhuzi on the Four Virtues and Its Significance 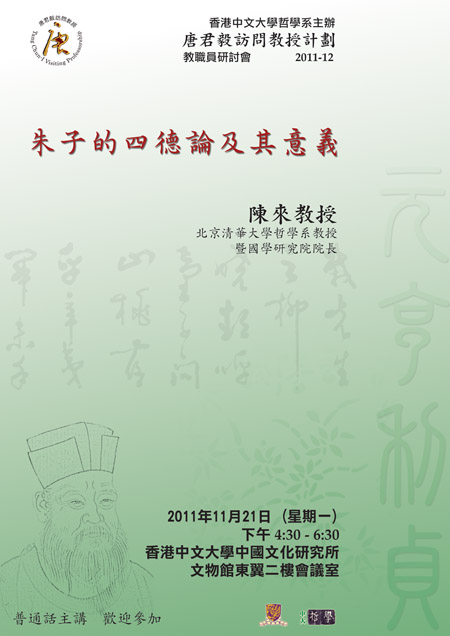