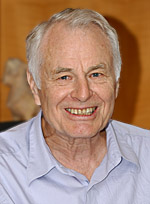 As a world renowned scholar, Prof. Føllesdal’s contribution to philosophy has earned him numerous prizes and honors. They include the University of Oslo Research Prize (1995), Alexander von Humboldt Research Prize (1997), Nansen Prize for Research from Norwegian Academy of Science and Letters (2003), the Lauener Prize (2006), and Doctor honoris causa conferred by the University of Stockholm (2003).

In March this year, Prof. Føllesdal was appointed Commander of the Royal Norwegian Order of St. Olav by the King of Norway, in recognition of his contribution to philosophy and ethics as well as his special contribution as a bridge between Anglo-American analytic philosophy and European continental philosophy.

Professir Føllesdal authored five books and edited more than a dozen others, including The Philosophy of W.V. Quine in five volumes. He has also authored numerous articles, many of which have been translated into different languages, including French, English, Portuguese, Spanish, Swedish, Russian, Czech as well as Chinese.

As the twelfth holder of the Tang Chun-I Visiting Professorship, Professor Føllesdal will offer a public lecture, a four-week graduate seminar on “The Life-World: Intersubjectivity and Ethics,” and a departmental seminar in the Department of Philosophy.

Husserl and Gödel on the Philosophy of Mathematics 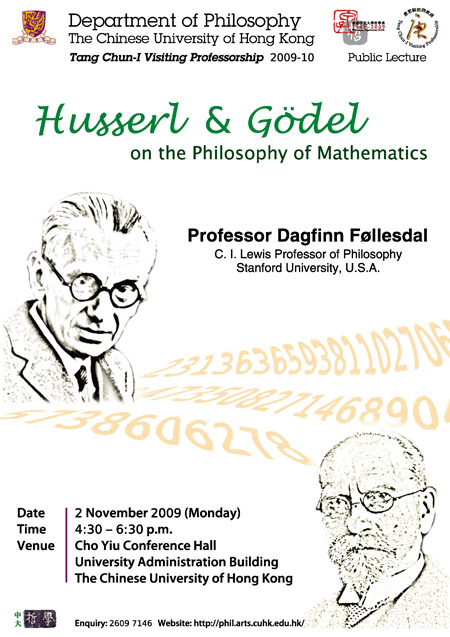 It is not widely known that there was a connection between Husserl and Gödel. Gödel’s Nachlass shows, however, that Gödel studied Husserl’s work carefully and regarded it highly.

After a brief presentation of Husserl’s view on mathematical objects and on justification in mathematics I will discuss Gödel’s view on these two themes. I will devote special attention to Gödel’s realism and the relation between this and the constructivist view that one finds in Husserl.

The comparison between Husserl and Gödel throws light on the following passage in the appendix that Gödel added to his article ”What is Cantor’s continuum problem?” when this was reprinted in Benacerraf and Putnam, Philosophy of Mathematics: Selected Readings in 1964, and which is often regarded as mysterious:

That something besides the sensations actually is immediately given follows (independently of mathematics) from the fact that even our ideas referring to physical objects contain constituents qualitatively different from sensations or mere combinations of sensations, e.g., the idea of object itself … . Evidently, the ‘given’ underlying mathematics is closely related to the abstract elements contained in our empirical ideas. It by no means follows, however, that the data of this second kind, because they cannot be associated with actions of certain things upon our sense organs, are something purely subjective, as Kant asserted. Rather they, too, may represent an aspect of objective reality, but, as opposed to the sensations, their presence may be due to another kind of relationship between ourselves and reality. (pp. 271-272)

The Life-World: Intersubjectivity and Ethics

Both volumes have been published in German and in English by Nijhoff (later taken over by Kluwer and now Springer). However, Husserl’s texts are written in a complicated language and if there are good Chinese translations of these two works it will probably be easier for the students to read these texts in Chinese.

The New Theory of Reference