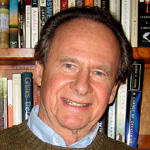 Professor Emeritus of Philosophy and of Chinese,
University of Michigan, U.S.A.

Professor Munro’s publications include The Concept of Man in Early China (1969), The Concept of Man in Contemporary China (1977), Images of Human Nature: A Sung Portrait (1988), The Imperial Style of Inquiry in Twentieth Century China: The Emergence of New Approaches (1996), and A Chinese Ethics for the New Century (2005) . He is also the editor of Individualism and Holism: Studies in Confucian and Taoist Values (1985).

Professor Munro delivered the Ch’ien Mu Lectures in History and Culture at New Asia College of the Chinese University of Hong Kong in 2003. As the seventh laureate of the Tang Chun-I Visiting Professorship, he will offer a public lecture entitled “Bad Hurricanes and Rising Sea Levels: Moral Complexities in Global Warming and Global Choices,” a four-week graduate seminar on “Evolution, Human Nature, and Ethics,” and a staff seminar in the Department of Philosophy on “Seeking Consistency and Transparency in Chinese Ethics and Law: Useful Sources in Confucian Ideas of Trust and Shame.” 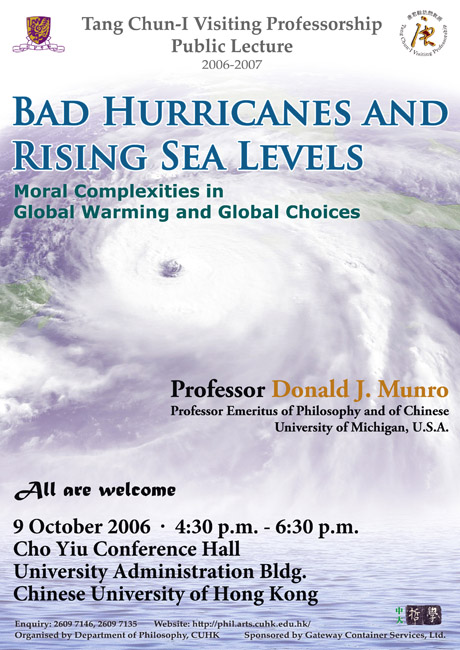 The technology exists to slow down the trajectory toward bad hurricanes and rising sea levels. However, politically we are at an impasse on how to use it. I suggest how to judge alternative solutions that face our two countries. The right path is the one that is consistent with some core human values, especially the equal worth of all people, and reciprocity. At present, neither the U.S. nor China have an energy policy. They need ones that stress the efficient use and reduced consumption of oil, and, at the center of my remarks, building new electricity generating plants that employ coal gasification.

The impasse on global warming centers on carbon emissions from coal burning power plants. China will not discuss changing its energy consumption unless the U.S. becomes serious about changing its consumption. The conflict is built into the Kyoto Protocol’s two tier set of mandatory requirements, some rules for industrialized nations and others for developing ones, such as China and India.

Instead of accepting the two-tiered set of requirements, my alternative choice demands something of everyone. Its appeal is the fact that it embodies the universal values of equal worth and reciprocity, from which all people will benefit. In this case, equal worth applies to people’s equal rights to the basic resources needed for survival, reproduction, and health: a climate with tolerable levels of greenhouse gases, clean air, and clean water. Reciprocity builds trust and leads to the benefits of cooperation. It would apply to the agreement by both China (and perhaps India ) and the U.S. to move rapidly toward adopting the new technology of gasification (integrated gasification combined combustion or I.G.C.C.). Its product for use in generating electricity, is “syngas,” from which carbon dioxide is removed and does not reach the atmosphere. In addition to both sides agreeing to a choice that benefits their current and future populations by reducing global warming, they would reciprocate in the sharing of information about the technology. Initially, this puts the U.S. in a donor capacity because it would share its existing secret technology. In time, China would have its own discoveries to share. The financial and political costs of this choice are such that only central government leadership can drive it to successful implementation.

Reciprocity can also apply between regional governments. Already in the U.S. there are state and city governments that are far more active on global warming than is the current Washington administration. This means there are local institutional and human models of doing the right things, from which we can learn. China has its local models as well.

Findings of the new sciences are relevant to (not determining of) what matters in ethics. This course will focus on what evolutionary biology and psychology have to say about human nature. It will show how that knowledge can help advance our consideration of certain ethical principles and how to act in accord with them. We can assume that many people are interested in ethical systems that work, that people will follow, rather than ignore or dislike and reject. The new findings help us formulate an ethical standard with which we are comfortable, and suggest how to encourage many people to comply with the standard. With that encouragement, they will do the right thing because it feels natural.

I. Conflicting motives coexist in human nature. Nothing morally good in themselves about the human motives produced by evolution. We are born with the capacities for parental love, sympathy, and reciprocal altruism. But also with those for tribalism and in-group out group divisions. Hence the need for an ethical standard to help us know which behavioral tendencies to cultivate and which to control. The role of reason in finding the standard.

II. What intuition, instincts, and the moral sense reveal about the content of the ethical standard. Combination of cognition and the emotions. Evidence for moral intuitions. The evolutionary survival value of moral intuitions. Mirror neurons and modeling on the minds of other. The source on instinctive empathy.

III. Innate social emotions accessible for promoting behavior consistent with the ethical standard: Shame/respect; Trust. Coexistence of cognitive and emotional factors in shame and trust. The role of commitment to a standard.

IV. Does evolutionary psychology help us know if we can choose between good and bad behavior, and, if so, how? The rejection of genetic determinism. Learning is inborn, leads to ability to change beliefs and choices. Also reject total malleability of human nature (reject the ability ¡§to create a new man.¡‥). Roles of genes and environment in facilitating ethical behavior. Prominence of individual choice and responsibility.

Seeking Consistency and Transparency in Chinese Ethics and Law: Useful Sources in Confucian Ideas of Trust and Shame

There is a relatively untapped source of motivational energy lying in familiar social emotions. Trust, anchored in China in the early idea of cheng (sincerity, trustworthiness) and shame/pride (xiuchi, xiukuei and zizunxin) are universal emotions. This seminar talk begins by revealing the meanings and logical content of some traditional and modern Chinese terms captured by the English words. Both trust and shame/pride have the same structure, being composed of feeling, cognition, and motivational components. In our time, the two emotions can be used to promote the values of consistency or predictability. These values underlie the kind of ethics and rule of law accepted as goals of the modern, civilized society. When motivating action, the values consistency and transparency are non coercive means of encouraging cooperation, initially between leaders and led, the so-called public trust. Cooperation, in turn, fosters evolutionary survival Acceptance of the values consistency and transparency can be built into the cognitive part of the two emotions, trust and shame.

After making a case for the continued honoring of the old legacies of cultivating trustworthiness (cheng) and being responsive to shame/respect, I turn from individual ethics to new and desirable institutional changes that incorporate some of that earlier legacy. I focus on the legal system, especially the role of judges in Chinese society. This system is often lacking in the values consistency and transparency. My focus begins with the reasons for that lack. It ends with one piece of the prescription for remedying the situation. This is the application to judicial training of the teaching method known in Western medical and business schools as “simulation.” The positive rewards and sanctions in the simulation training involve trust and shame/respect.