world-renowned scholar of Kant and Fichte, Professor Zöller has received numerous awards and fellowships, including a Fellowship for University Teachers from the U.S. National Endowment for the Humanities, and the John G. Diefenbaker Award from the Canada Council for the Arts. Professor Zöller has served on the editorial board of many academic journals in North America, Europe, and Asia. He is also an editor-in-chief of the Complete Works of J. G. Fichte (Bavarian Academy of Sciences), and a member of the governing board of the Collected Works of Kant (Berlin-Brandenburg Academy of Sciences).

s the seventeenth incumbent of the Tang Chun-I Visiting Professorship, Professor Zöller will give a public lecture on “The Ideal Republic: Kant and Plato,” offer a graduate seminar on “Republics Old and New: Political Freedom in Classical Greek and Modern European Philosophy” and present a departmental seminar on “The Real Republic: Hegel and Plato.”

The Ideal Republic: Kant and Plato 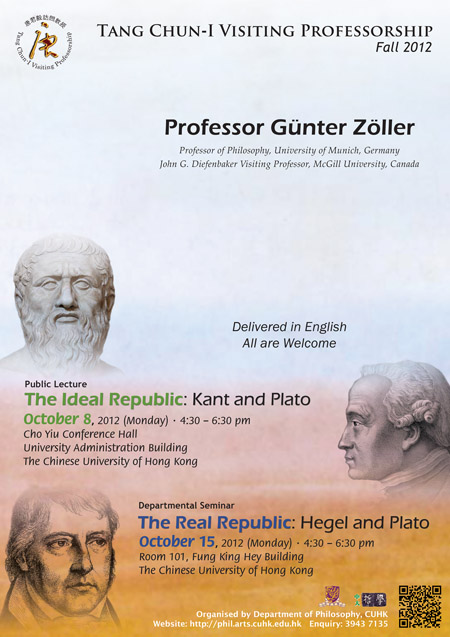 The lecture will assess the status and function of political society in ancient and modern philosophy by investigating the reference to Plato in Kant’s normative account of the state understood as “commonwealth” or “republic” (Gemeinwesen, Republik). Section one will place Plato’s Republic in the twofold context of ancient and modern political thought, focusing on the elitist critique of democratic rule and the modern revival of the republican tradition. Section Two will detail the state’s republican constitution as a practical idea in Kant, stressing the role of freedom in his conception of the modern polity. Section Three will introduce Kant’s extension of civil society from the political and juridical to the religious and ethical spheres.

The Real Republic: Hegel and Plato

The seminar will analyze Hegel’s critical recourse to Plato in his theory of the modern state. Section One will contrast ancient and modern accounts of the relation between the private, the social and the political. Section Two will track Hegel’s critical discussion of Plato’s Republic in the Philosophy of Right focusing on personal property, individual freedom and the rule of law. Section Three will compare and contrast the philosophical dignity of the state in Hegel with the metaphysical justification of political justice in Plato.