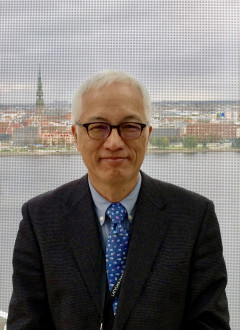 Prof. Lin Chen-kuo is the Professor Emeritus of the Department of Philosophy, National Chengchi University. He was the former chairman of the Taiwan Philosophical Association and the convener of the Philosophy Division of the Ministry of Science and Technology. Prof. Lin has held various visiting positions at Leiden University (1999–2000), the Chinese University of Hong Kong (2005), and Harvard University (2012), and has long presided over a number of integrated cultivation programs and research programs. Prof. Lin has published books and articles in Chinese, English, and Japanese, including Emptiness and Methods: Explorations in Cross-Cultural Buddhist Philosophy (in Chinese; Taipei: The NCCU Press, 2012); Emptiness and Modernity: From the Kyoto School, Modern Neo-Confucianism to Multivocal Hermeneutics (in Chinese; Taipei: New Century Publication, 1999); A Passage of Dialectics (in Chinese; Taipei: New Century Publication, 2002); and several articles in Journal of Chinese Philosophy, Journal of Indian Philosophy, Dao: A Journal of Comparative Philosophy, and Journal of the International Association of Buddhist Studies. 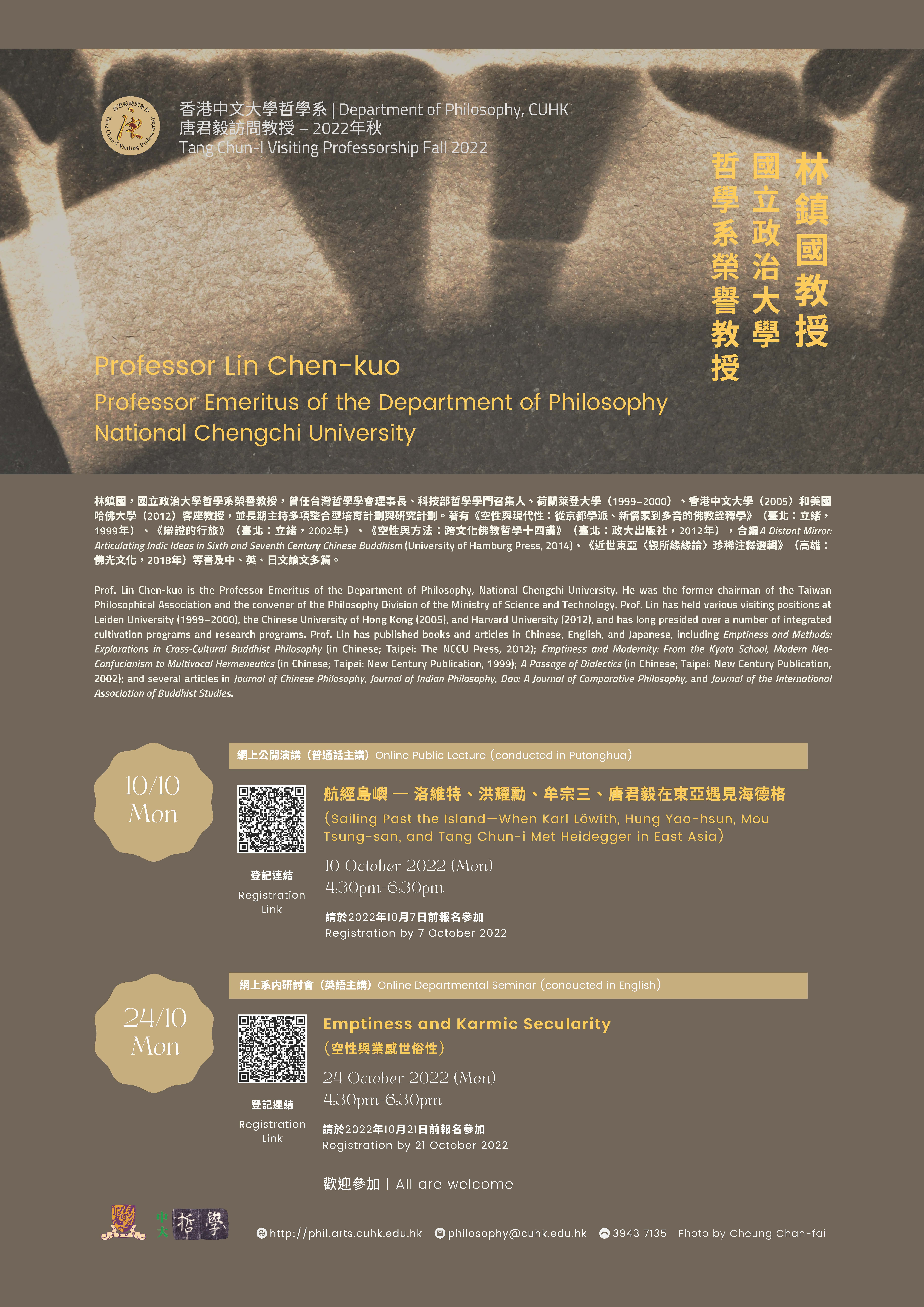 Please register by 7 October 2022 to attend the public lecture.

From the perspective of the history of diaspora (what Mr. Tang Chun-i called “Drifting Petals”), this public lecture talks about the philosophical narrative related to the island of Taiwan through the history of the wars in Europe, the Pacific War, and the Kuomintang-Communist war from the early 1930s to the mid-20th century. Philosophical narrative is also a piece of philosophical meditation about what my generation has witnessed. At the end of 1936, Karl Löwith (1897–1973), one of the “Children of Heidegger,” went into exile in Japan when Hitler came to power to persecute the Jews. He stopped at Keelung during his voyage and visited Taipei. Hung Yao-hsun (1903–1986), an assistant in the philosophy department of the colonial Taihoku Imperial University at that time, was enlightened by the Kyoto School’s contact with the existential philosophy in early Heidegger, and had already responded to the philosophy of early Heidegger and his Kant and the Problem of Metaphysics. Unfortunately, the two missed the chance to meet. After the war, I bought and read Mou Tsung-san’s Intellectual Intuition and Chinese Philosophy (1971) when I was in my fourth year of college, and began to understand the interpretation of Heidegger’s philosophy in the Chinese philosophical circle. In the 1970s, Mou and Tang came to Taiwan to give lectures when I was doing my master’s degree. They had a great influence on Taiwan’s philosophical circles. After half a century, from the diasporic perspective of the East Asian waters and islands, let us go back to Europe (Germany) and East Asia (Japan, colonial Taiwan and Hong Kong) in the 1930s, re-narrate how Löwith, Hung, Mou and Tang—all of whom had once sailed past the island—responded to the philosophy of early Heidegger, especially Kant and the Problem of Metaphysics, and ask in this narrative context: What is a human being? How can one be in peaceful dwelling?

Delivered in Putonghua
All are welcome

Please register by 21 October 2022 to attend the departmental seminar.

I will start my talk from a dialogue with the “significant others,” Charles Taylor and Jürgen Habermas. In 2007, Charles Taylor published A Secular Age. In 2010, Jürgen Habermas published An Awareness of What is Missing: Faith and Reason in a Post-Secular Age. As hindsight, it is not an incident for them to address the same concern on the issue of the secular in the beginning of new millennium. Although the philosophical stances of Taylor and Habermas are different, they nevertheless meditated on the similar cultural and political situation they have faced in Europe and North America, that is, the loss of some sort of religious significance and its cultural effect. Among other implications, their thinking would be properly understood without referring to the resurgence of religions in past decades, including the religious/nonreligious conflict or violence around the whole world. Turning to East Asia, should we be bothered by the same issue of secularity with which Charles Taylor and Jürgen Habermas are deeply concerned? Isn’t it a common sense nowadays to say that the dichotomy between the sacred and the secular can only be found in the Judeo-Christian world? If the dichotomy as such is absent in East Asian traditions, should we take it seriously?