Born in Switzerland in 1946, Professor Rudolf Bernet received his B.A. and M.A. degrees from the Universite catholique de Louvain and his Ph.D. from the Katholieke Universiteit Leuven in 1976. Since 1979, he has been successively Assistant Professor, Associate Professor and Full Professor at the University of Leuven . After having served for a decade (1997-2007) as the Director of the Husserl-Archives at Leuven , he is now the President of this prestigious Archives.

Prof. Bernet has served at the Board of Directors of the Husserl-Archives since 1979. He was the Vice-President of the German Society for Phenomenological Research from 1994 to 1996 and became President from 1996 to 1998. Prof. Bernet is the Honorary Director of the Archives for Phenomenology at Peking University since 2000 and also the Honorary Director of Archive for Phenomenology & Contemporary Philosophy here at the Chinese University of Hong Kong . He is the editor of the prestigious collections Husserliana , Edmund Husserl Collected Works & Phaenomenologica . He also serves on the editorial board of Husserl Studies and many other scholarly journals.

Prof. Bernet has published several books on Husserl and Phenomenology and over a hundred articles on various topics in Phenomenology and other domains of contemporary philosophy. Moreover, he has given over 100 academic lectures in almost every corner of the world, from Prague to Kyoto.

As the tenth laureate of the Tang Chun-I Visiting Professorship, Professor Bernet will offer a public lecture entitled “Intentional Consciousness and Non-Intentional Self-Awareness,” a four-week graduate seminar on “Husserl’s Phenomenology of the Body,” and a staff seminar in the Department of Philosophy on “Bergson on the Driven Force of Consciousness and of Life.” 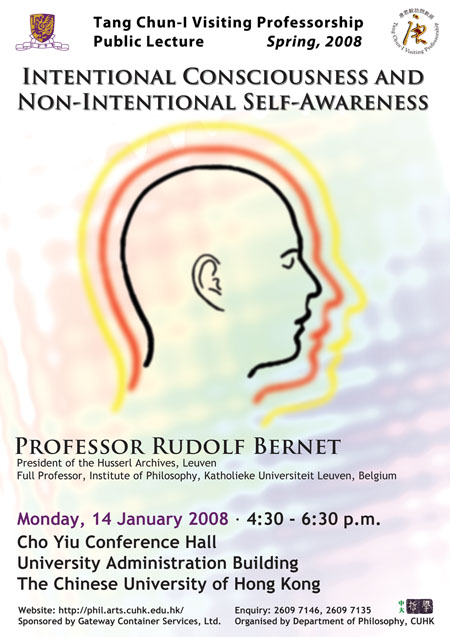 Intentionality, understood as the conscious experience of an object, seems unfit to account for the dynamic character of both perception and self-awareness. Perception is essentially a matter of bodily movements, and the kinesthetic and affective (pleasure/pain) sensations related to these (goal oriented or playful) movements constitute the most fundamental sort of self-awareness. A less immediate mode of self-awareness is needed in order to cope with traumatic experiences. They require a form of taking distance that only a conscious remembering of one’s bodily sensations can provide. Such self-awareness through a distance shouldn’t, however, be confused with the intentional representation of an object. But it remains true that all intentionality involves distance. This can best be shown by the example of phantasy. Acts of phantasy are a genuine sort of intentional consciousness with a self-awareness in which a freely chosen splitting of the self allows for a creative mode of self-appropriation. Far from resembling the splitting of the self entailed by a traumatic exposure to something foreign, relating to oneself through the liberating distance of an act of phantasy (and of memory) makes the weight of one’s own life bearable.

Husserl's Phenomenology of the Body

Content: Naturalistic accounts of physical bodies and of consciousness; mind and brain; the inner experience of one’s own body; the spatiality of the lived body; the body as organ of perception; the twofold experience of one’s own body as Korper and Leib ; the awareness of other minds on the basis of their expressive bodies; the constitution of objective nature by a community of bodily subjects; causality and motivation; cultural objects as spiritual bodies.

Required reading: E. Husserl, Ideas Pertaining to a Pure Phenomenology and to a Phenomenological Philosophy. Second Book: Studies in the Phenomenology of Constitution , translated by R. Rojcewicz and A. Schuwer, Edmund Husserl Collected – Works III.

Bergson on the Driven Force of Consciousness and of Life

A comparative analysis of Matter and Memory (1896) and Creative Evolution (1907) show how the notion and structure of “duration”, first introducted in Time and Free Will (1889) is given the new, dynamic meaning of a creative force when used to explain how unconscious memories of the past are actualized in a present perception and how the evolution of life is steered by the ” élan vital “. It is tempting, then, to draw a parallel between Bergson’s account of the “push” of the past towards the present or life’s “explosive force” and Freud’s theory of the drive. Such an interpretation makes one aware not only of what they both owe to Schopenhauer (rather than Aristotle), but also of Bergson’s aversion against negative drives and negativity in general. Bergson tries to compensate for this by ascribing consciousness and life a creative capacity to cope with the external obstacles that threaten their drive towards self-affirmation. His description of how the initial opposition between mind and brain or between life and matter is thereby trasformed into an order of mutual dependency also opens new metaphysical perspectives that lead beyond traditional forms of dualism or monism. This new metaphysics which understands the driven movement of consciousness and life “from within” also requires a new form of non intellectual knowledge Bergsion calls “Intuition”. Intuition as a new “method” of philosophical (and artistic) insight remains faithful the driven force animating consciousness and life without disregarding its genuine form of rationality.