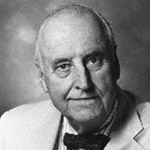 Professor William Theodore de Bary, John Mitchell Mason Professor Emeritus and Provost Emeritus of Columbia University , was born in 1919 and earned his academic degrees from Columbia University (A.B. 1941, M.A. 1948, Ph.D. 1953). From 1942-46, he did his war service in the United States Naval Reserve (Intelligence) and served as a Yeoman 2nd Class to Lieutenant Commander.

Professor de Bary began his career as a teacher at Columbia University in 1949 when he undertook to develop the undergraduate general education program in East Asian Studies. For this, he developed basic source readings in Asian Civilizations for India , China , Japan and Korea . These volumes dealing with the major traditions of Asia have seen wide use in colleges and universities throughout the United States and abroad. They have now been supplemented by over 140 other texts and translations for use in general education on Asia . As chair of the Department of East Asian Languages and Cultures from 1960-66 and director of the East Asian Language and Area Center from 1962-72, he led a major expansion of the language programs in Chinese, Japanese, and Korean. Emeritus since 1989, , he still teaches courses as a Special Service Professor in the East Asian Languages and Cultures Department.

From 1969-70, Professor de Bary was President of the Association for Asian Studies. From 1969-71, he served as the first chair of the Executive Committee of the University Senate of Columbia University. From 1971-78, as Provost of the University, among many other duties, Professor de Bary assisted in the renovation and expansion of the East Asian Library and established the Heyman Center for the Humanities, which includes among other programs, offices and a reading room for the Human Rights Program. From 1978-86, he was the Director of American Council of Learned Societies.

In 1974 Professor de Bary was elected to the American Academy of Arts and Sciences and in 1999 to the American Philosophical Association. He has received honorary degrees from St. Lawrence University (D. Litt. 1968), Loyola University of Chicago (LHD 1970), and Columbia University (D. Litt. 1994). Professor de Bary has also been awarded a number of prizes, including the Watumull Prize of the American Historical Association in 1958, the Fishburn Prize of Educational Press Association in 1964, the Great Teacher Award of Columbia University in 1969, the John Jay Award of Columbia College in 1971, the Lionel Trilling Book Award in 1983, the Mark Van Doren Prize in 1987, the Order of the Rising Sun (Third Class) in 1993, the Frank Tannenbaum Memorial Award in 1995 and the Alexander Hamilton Medal in 1994 and 1999.

Professor de Bary’s scholarly work has focused on the major religious and intellectual traditions of East Asia , especially Confucianism in China , Japan , and Korea . He introduced the field of Neo-Confucian studies to the United States , while championing an entirely new vision of the place of Asia in general education and the core curriculum. In recent years , among the more than twenty-five works he has authored or edited, he has dealt principally with the issues of civil society and human rights in China . The most recent of his books is Nobility and Civility: Asian Ideals of Leadership and the Common Good , published by Harvard University Press in 2004.

Professor de Bary held the Ch’ien Mu Lectureship of the Chinese University of Hong Kong in 1982. As the fourth holder of the Tang Chun-I Visiting Professorship, he will offer a public lecture entitled “Confucian Education and ‘the Point of Democracy’” and a staff seminar in the Department of Philosophy on “ Asian Classics and Global Education.”

Confucian Education and 'the Point of Decmocracy' 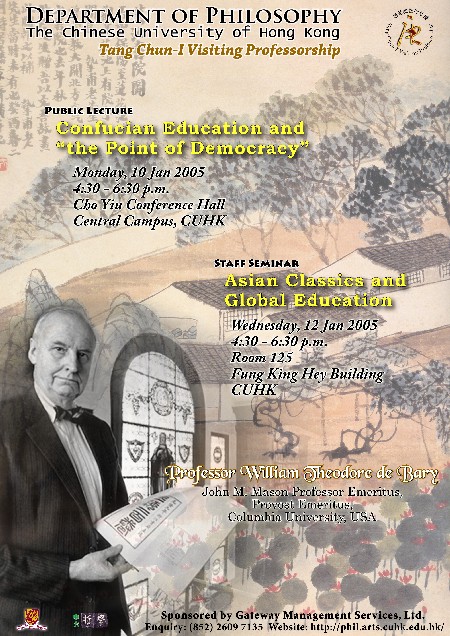 It is commonly accepted that democracy is a quintessentially Western idea and a unique feature of Western civilization, originating in ancient Greece . Is democracy compatible with Asian values and cultures, and more particularly, with the Confucian tradition? This question bears not only on the possibility of implementing a democratic system in Asian countries, but also on how a “clash of civilizations” can be avoided.

This paper begins with Amartya Sen’s idea of “the Point of Democracy” which is that democracy consists primarily in “public reasoning.” Sen believes that the”Point of Democracy” is shared by most ancient civilizations, those of Asia included. The paper proceeds to show that central to the Confucian tradition are certain liberal elements that can be considered cultural resources to be availed of in support of liberal democracy. An essential point is the emphasis on education in all forms of Confucianism, which views education not just as a matter of skill acquisition, but humanistic learning for self-development and self-cultivation.

Confucianism has gradually recovered from the turbulent years of the Cultural Revolution and is now regaining credibility in China . An existing example of how Confucian values might be incorporated into the practice of governance is the Singaporean model developed by Lee Kuan Yew. Lee suggests that scholars should apply themselves not to studying the classical texts, but to discovering new knowledge, developing commercial products and technologies, and so on. Against this, the paper agues that, to achieve the Confucian ideal of self-cultivation through intellectual and moral learning, it is of primary importance to engage in dialogue with the great books and to learn by discussion with others. This kind of discursive learning not only contributes to the education of the whole person, but to the formation of a civil society, which is essential to liberal democracy.

Andrew Solomon is right in saying that we are what we read. Pursuing hi-tech training at the expense of studying the classics does not lead to a society favorable to democratic development. As part of the core curriculum of many universities, American liberal or general education is similar in some respects to the classical humanistic education of pre-modern East Asia . The possibility exists that a new core curriculum with a global scope could draw on traditional resources from both East and West.

To sum up, the paper tries to make the following basic points: