Professor Frank Cameron Jackson took mathematics and philosophy at the University of Melbourne and a PhD in philosophy at La Trobe University. He taught at Adelaide for a year (1967) before moving to La Trobe and then to a chair at Monash University (1978). He joined the Australian National University in 1986 as Professor of Philosophy and Head of the Philosophy Program, Research School of Social Sciences. At Australian National University he has served as Director of the Institute of Advanced Studies (1998-2001) and Deputy Vice-Chancellor (Research) (2001).

In 1995, Professor Jackson gave the John Locke Lectures at Oxford University. In 2003 he gave the Patrick Romanell Lecture at the American Philosophical Association and gave the Heffer lecture at Cambridge University in 2005. In 2006 he will give the Brown-Blackwell Lectures at Brown University. He is a Corresponding Fellow of the British Academy, a Fellow of the Australian Academy of the Humanities, and the Academy of the Social Sciences in Australia.

In Janurary this year, Professor Jackson was awarded the Order of Australia for service to education, particularly in the disciplines of philosophy and social sciences, as an academic, admisistrator and researcher.

As the sixth laureate of the Tang Chun-I Visiting Professorship, Professor Jackson will offer a public lecture entitled “Philosophy and the Departments of Knowledge,” a four-week graduate seminar on “Mind and Meaning in the Age of Materialism,” and a staff seminar in the Department of Philosophy on “Indicative Conditionals Revisited.”

Philosophy and the Departments of Knowledge 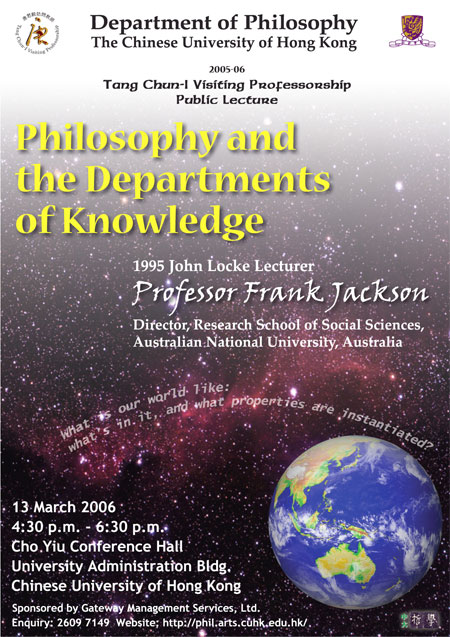 What is our world like: what’s in it, and what properties are instantiated?

Mind and Meaning in the Age of Materialism

Description:
The rise of materialism reshaped the philosophy of mind. Old problems had to be located inside a naturalistic framework. The same is happening in the philosophy of language. In these lectures we will approach the topic of mind and meaning from a materialistic perspective in which the notion of representation will figure prominently. Topics covered will include representation, reference, truth, and externalism.

Each lecture will be given as a talk to Powerpoint and the ppt slides will be available after each lecture.

Background readings :
1.) Chapter one “A short history of theories of names” in Sainbury’s recent book “reference without referent” – HTML 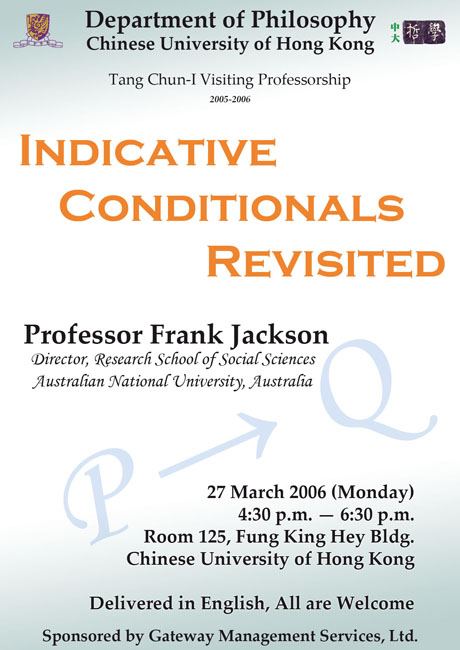