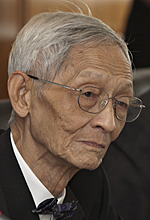 Prof. Lao is a prolific writer. He is the author of more than 30 books including the 3-volume History of Chinese Philosophy (existing in classical and simplified Chinese edition as well as Korean translation); Lao Sze-Kwang’s Early Writings (7 volumes); A New Compilation of Professor Lao Sze-Kwang’s Academic Works (13 volumes); Lectures on Philosophy of Culture ; Illusion and Hope: On Contemporary Philosophy and Culture ; The World of Crisis and the New Century of Hope: On Contemporary Philosophy and Culture , II ; Chinese Culture’s Way Ahead: New Reflections ; Philosophical Essays ; and Selected Poems of Lao Sze-Kwang . For over two decades his History of Chinese Philosophy has been a must read for teachers and students of the history of Chinese philosophy or Chinese thought across the Taiwan Straight.

Yet Prof. Lao is not a scholar confined to the ivory tower. He took part actively since his youth in the construction of democracy and legal rule in Modern China. His reflections on the future of China and the entire humanity can been seen in the following works: Philosophy and Politics ; Knowing Oneself and Knowing Others ; Remote Concerns and Immediate Worries (all in Lao Sze-Kwang’s Early Writings ); The Punishment of History, New & Augmented Edition ; China’s Way Out, New & Augmented Edition ; Liberty, Democracy and Cultural Creation ; China in the World: Essays on Contemporary Issues (all in A New Compilation of Professor Lao Sze-Kwang’s Academic Works ); Disenchantment and Legislation ; and Lao Sze-Kwang’s Essays on Social and Political Issues .

Prof. Lao is the ninth laureate of the Tang Chun-I Visiting Professorship and the first scholar of Chinese origin to receive such honour. He will offer a public lecture on “Variations and Constancy in Philosophical Problematics”, and a four-week graduate seminar on “Rationality: a Defense.”

Variations and Constancy in Philosophical Problematics 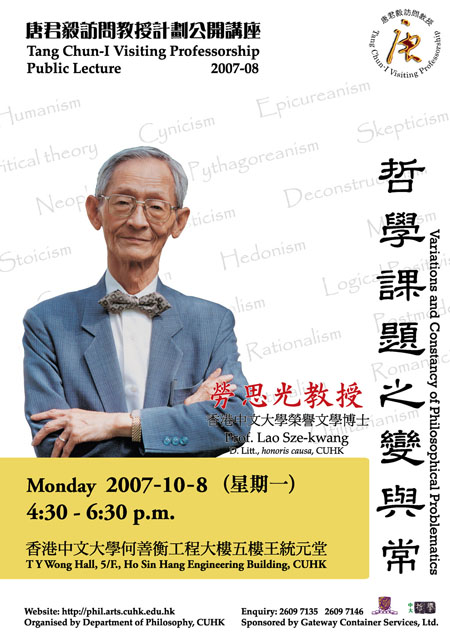 1. On the constantly changing character of philosophical problematics

“Philosophy has no definition”: this expression is repeated throughout the history of philosophy. The precise meaning of this expression consists in the following: philosophical problematics are constantly changing from one to another, thus there cannot be any “essential definition” for philosophy. In other words, it is not possible to define philosophy in the following way: “philosophy is the study of such and such a domain of problems”. Ancient philosophers have tried to define philosophy in various ways, but resulted in numerous theoretical difficulties. Modern philosophers often use “ostensive definition” to tackle the problem of definition of philosophy. In fact, when the term “philosophy” is used in daily language, it is under such a usage in most cases.

2. Theoretical problems derived from the determination of philosophical thinking

If philosophical thinking is understood as reflective thinking, it shows a formal universality. However, the interests inherent in different ethnicities and communities serving as the basis of their reflective thinking are different. If universality can only be affirmed at the purely formal level, the difference in interests among different philosophical traditions renders them “incommensurable”. If this problem cannot be overcome, the “world of meaning” will be a fragmented world. Inherent in the image of this fragmented world is: each of its heterogeneous parts will have her own rationality. “Rationality” will thus be a term basically incomprehensible. The entire theoretical endeavor for philosophical and cultural enquiry would be immerged in the muddle of “failure of self-understanding”.

3. The present lecture will try to tackle this immense problem and provide some suggestions as conclusion.

(III) Significance of the concept of Rationality for Philosophy of Culture