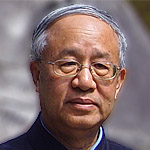 As the fourteen incumbent of the Tang Chun-I Visiting Professorship, Professor Feng will offer a public lecture on “The Critical Spirit of Laozi and Zhuangzi,” a four-week graduate seminar on “Development of Confucianism Revisited” and a departmental seminar on “The Wisdom of Confucius and Mengzi on Life.”

The Critical Spirit of Laozi and Zhuangzi 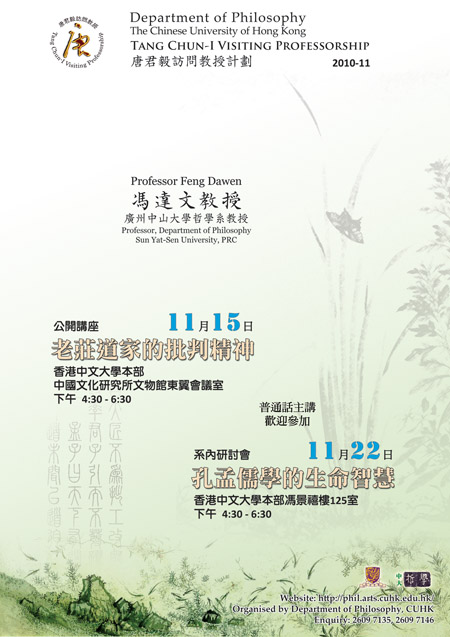 Scholars in the past mostly regarded Daoism as a subjective or personal pursuit and ignored its critical aspect.

In the two passages that follow, we will see that Daoism is pessimistic about social and historical change. From ‘All Under Heaven’ in Zhuangzi , “ancients” are praised as those who “combined the spirit with the illuminations, coupled heaven with earth, nourished myriad things and brought the world into harmony.” By contrast, the author deplores the contemporary world, saying: “How sad! The various schools go asunder without returning, making it impossible for them ever again to come together.”

Confucians have a similar observation. In ‘Li Yun’ in the Li Ji , ‘Grand Union’ ( datong ) is taken as an ideal in ancient society, where “a public and common spirit ruled all under the sky” ( tianxia wei gong ). The prevailing practice that “the whole world is for the royal family” ( tianxia wei jia ), on the contrary, showed the decline of this Confucian ideal. Such a decline is characterized by the notion of ‘separation’ ( fen ), for example, “every one loves, above all others, his own parents and cherishes his own sons. People accumulate articles and exert their strength for their own advantage.” In the Zhuangzi , ‘tearing-apart’ ( lie ) is used to describe the same phenomena: the “‘arts of the Dao’ will end up being torn apart by the world.”

In contrast to ‘Grand Union’ and ‘Great Mixture’ ( huntong ) in ancient times, the process of ‘separation’ and ‘tearing-apart’ seems to be a direction of the progress of civilization, expressed in terms of distinction-making in understanding, differentiation in classes, sharing of rights, and so on. Critical reflection on civilization and progress is a common concern shared by Confucians and Daoists.

Confucians are different from the Daoists in believing that ‘primary prosperity’ ( xiaokang ) can be achieved by one’s self-cultivation and ritual practice, even if one is estranged from Nature. Daoists, on the other hand, never stop asking about the origin of the ‘separation’ or ‘tearing-apart.’ Daoists believe “the more sharpened tools the people have, the more benighted the state” and direct their criticism towards the invention of tools. They think “the better known the laws and edicts, the more thieves and robbers there are’ and dismiss the advancement in governance. By the fable of Hundun , the Zhuangzi criticizes knowledge in general. By the tale of the ‘master swordsmith smelting metal,’ the Zhuangzi stresses the true relation of human to Nature.

All these passages demonstrate that Daoism does offer some critical reflections on the tension between Nature and human as well as the tension among people. They think these tensions have been caused by the advancement in civilization, by man alienating from Nature and becoming ‘cultivated.’

Laozi’s classical cosmology is the basis of his social and cultural criticism and his reflections on civilization and progress. His ideal ‘Back to Nature’ is the backbone of his feeling towards ‘ritual community’.

Zhuangzi’s skepticism about human understanding is the basis of his criticism of society, culture, civilization, and progress. His ‘sense of the absurd’ nurtures his idea of ‘artistic life.’

In modern society, people tend to favor subjectivity and individuality, and become very instrumental and interest-oriented. The conflict between human and Nature as well as between the individual and others becomes more acute. It may be timely for us to recognize and appreciate the critical spirit of Laozi and Zhuangzi and their concern for human values.

Note: The following books have been consulted regarding the text from Zhuangzi , Laozi and Li Ji .