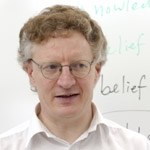 He became a Fellow of the British Academy and a Fellow of the Royal Society of Edinburgh in 1997. Since 2004, he has also been a foreign member of the Norwegian Academy of Science and Letters. Professor Williamson has given numerous named lectures, including the Henriette Hertz Lecture (British Academy, 1996), the Skolem Lecture ( University of Oslo , 2004), the Blackwell Brown Lectures ( Brown University , 2005), and the Jack Smart Lecture ( Australian National University , 2005). He was the Nelson Distinguished Professor at the University of Michigan in 2003 and the President of the Aristotelian Society in 2004–05. He is currently the President of the Mind Association (2006–07).

Professor Williamson’s publications include over 100 articles and four books: Identity and Discrimination (Blackwell, 1990), Vagueness (Routledge, 1994), Knowledge and Its Limits ( Oxford , 2000), Vagueness (co-edited with Delia Graff, Ashgate/Dartmouth, 2002) and The Philosophy of Philosophy ( Blackkwell, forthcoming 2007).

As the eighth laureate of the Tang Chun-I Visiting Professorship, Professor Williamson will offer a public lecture entitled “Knowing What Would Have Been,” a four-week graduate seminar on “Knowledge and Belief,” and a staff seminar in the Department of Philosophy on “Metaphysical Conceptions of Analyticity.”

Knowing What Would Have Been 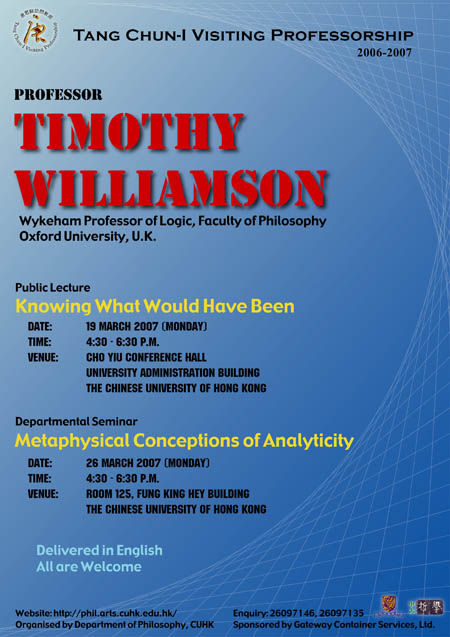 We will start by establishing some basic relations between knowledge and belief (knowledge entails true belief but not vice versa). It will then be argued that there are unknowable truths, although we cannot know what they are. The question will then be raised as to whether knowledge can be analysed as true belief plus some extra factors, such as justification).

Meeting 2: The problem of scepticism

We will consider how scepticism arise by pushing quite reasonable arguments for caution to the limit, and what the relation is between scepticism and fallibilism. We will then analyse the conception of evidence underlying the sceptic’s arguments, show that it depends on a controversial assumption, and argue that the assumption is false.

Meeting 3: The nature of justification

Meeting 4: Semantic internalism and externalism, and their implications for justification

The basic approach of the course will be based on that to be found in my book, Knowledge and its Limits (Oxford: Oxford University Press, 2000); chapters 1 and 12 are the most relevant to the first meeting, but are not easy reading. A good recent collection of papers on scepticism is Keith DeRose and Ted Warfield, eds., Skepticism: A Contemporary Reader (Oxford: Oxford University Press, 1999). Some of the material on justification in meetings 3 and 4 will be taken from my paper ‘On being justified in one’s head’, forthcoming in J. Greco, A. Mele and M. Timmons, eds., Rationality and the Good (Oxford: Oxford University Press, 2007) but also available on my webpage; that paper is in turn a response to a paper by Robert Audi, ‘An internalist theory of normative grounds’, Philosophical Topics 29 (2001): 19-46. The level of discussion in the classes may be less technical than in the book. Almost any recent standard textbook of epistemology would provide a suitable contrast to the approach to be taken here. Participants in the class should certainly have read Edmund Gettier, ‘Is justified true belief knowledge?’, Analysis 23 (1963): 121-123. For semantic externalism, see Hilary Putnam, ‘Meaning and reference’, Journal of Philosophy 70 (1973): 699-711, and Tyler Burge, ‘Individualism and the mental’, Midwest Studies in Philosophy 4 (1979): 73-121.

This article examines a variety of attempts to develop a metaphysical account of analyticity. Some depend on misconceptions about meaning or truth. Others yield intelligible notions of analyticity, by watering down the traditional account to a point where it loses most of its usually supposed implications. They provide no reason to regard analytic truths as in any way insubstantial. Even if core philosophical truths are analytic in such a sense, that does not explain how we can know or justifiably believe them. At best it reduces the problem to the epistemology of another class of truths, such as necessary truths or logical truths. The upshot is that philosophical truths are analytic at most in senses too weak to be of much explanatory value or to justify conceiving contemporary philosophy in terms of a linguistic or conceptual turn.